On the Atlantic sea floor, where geology meets oceanography, the UK’s Open University makes itself felt . . .

I’m just a bit of sea floor on this mighty solid sphere.
With no mind to be broadened, I’m quite content down here.
The mantle churns below me, and the sea’s in turmoil, too;
But nothing much disturbs me, I’m rock solid through and through.

I do pick up occasional low-frequency vibrations –
(I think, although I can’t be sure, they’re sperm whales’ conversations).
I know I shouldn’t listen in, but what else can one do?
It seems they are all studying for degrees from the OU. They’ve mentioned me in passing, as their minds begin improving:
I think I heard them say “The theory says the sea-floor’s moving . . .”.
Well, that shook me, I can tell you; yes, it gave me quite a fright.
Yet I’ve not moved for ages, so I know it can’t be right.

They call it “Plate Tectonics”, this new theory in their noddle.
If they would only ask me, I could tell them it’s all twaddle.
Apparently, I “oozed out from a mid-Atlantic split,
Solidified and cooled right down, then moved out, bit by bit”.

But, how can I be moving, when I know full well myself
That I’m quite firmly anchored to a continental shelf?
“Well, the continent is moving, too; you’re pushing it, you see,”
I hear those OU whales intone, hydro-acoustically.

Now, my best mate’s a sea floor in the mighty East Pacific.
He reckons life is balmy there: the summers are terrific!
He’s heard the whale-talk, too, and found it pretty scary.
“Subduction” was the word he heard, which sounded rather hairy. 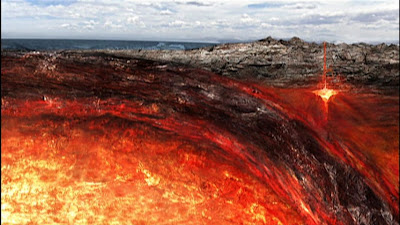 It was to be his fate, they claimed with undisguised great relish:
A hot and fiery end to things – it really would be hellish.
In fact, he’d end up underneath my continent, lengthwise,
So I would be the one to blame for my poor mate’s demise.

Well, thank you very much, OU. You’ve upset my composure.
Next time you send your student whales to look at my exposure
I’ll tell them it’s a load of tosh: it’s they who move, not me,
Those arty-smarty blobs of blubber, clogging up the sea!