Knowing that Dr. Beringer, of Würzburg University, was desperate to amass a collection of Natural Curiosities, two colleagues from Würzburg University, J.Ignatz Roderick, professor of geography, and Georg von Eckhart, a librarian, arranged for him to find or obtain all manner of wondrous “fossils”, subsequently called “Lügensteine” (“lying stones”) 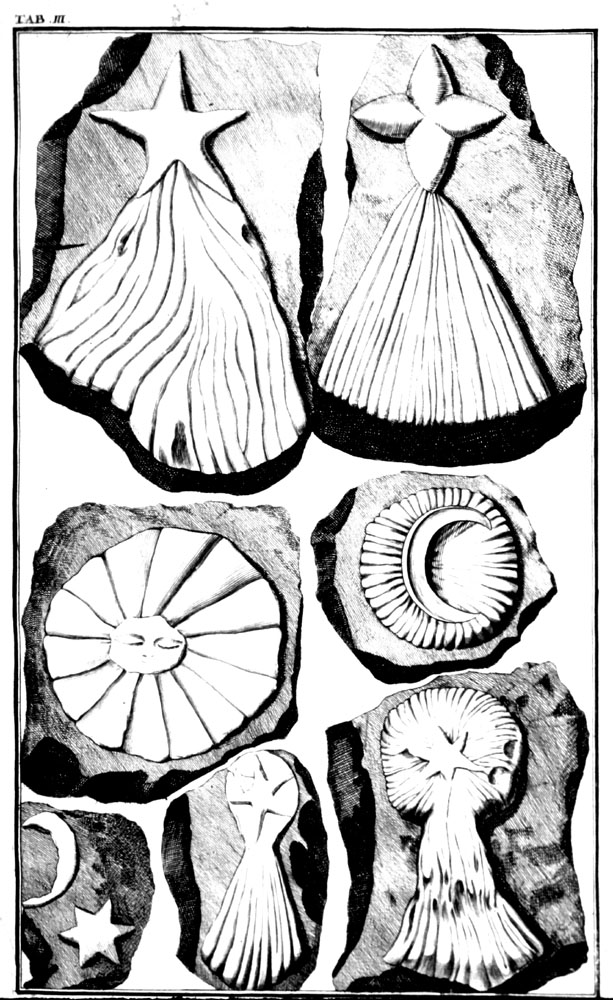 Johann Beringer’s claim to a dubious fame
Is his Lithographiae Wirceburgensis.
It shows, from page one, many pictures that stun
But appear under quite false pretences.

He’d found stones with raised features showing all sorts of creatures
Which Nature, he said, could have made.
If only he’d known that every such stone
Was a dastardly trick being played.

J. I. Roderick and Eckhart, creators of rock art,
So envied our Johann’s good name
That they hatched up a plan that would make the poor man
A laughing stock, covered in shame.

They carved rocks with care and placed them just where
Dr. Beringer surely would find them.
So he thought it good luck when a fine “fossil duck”
Appeared as he followed behind them!

He just wasn’t fazed: he acquired them, amazed
At these fortunate fruits of his zeal.
He thought his collection was nearing perfection –
Yet most of the items weren’t real.

Did he not understand that supply and demand
Worked to fuel his desire to be famous?
His acceptance of “finds” of weird things of all kinds
Made him look like a sad ignoramus.

But don’t draw a veil over Beringer’s tale
Without noting a side that was finer:
A man of renown, top doc in his town,
Until toppled by these Lügensteine.