On 17 May 2000, Chicago’s Field Museum of Natural History revealed the results of their three-year reconstruction of the bones of the largest, best preserved and most complete T.Rex ever found. Named after its discoverer, the skeleton was bought by the museum at auction for $8.36m, largely funded by two well-known US corporations. In this dinosaur’s view of the event, a degree of poetic licence is evident, but most is based on material from its website. 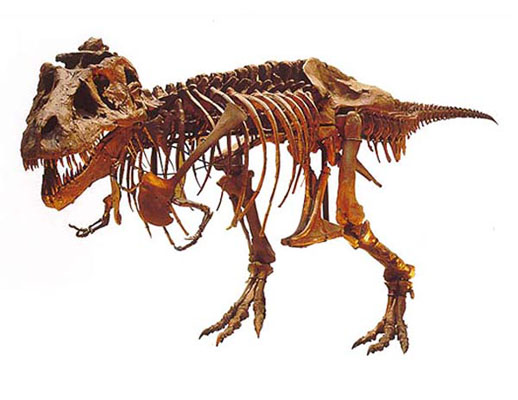 I am a T.Rex – well, I was –
But my bones are called “Sue”; that’s because
Susan Hendrickson found them and plastered around them,
Protecting them all against loss.

For eight million dollars or so
They were sold off and propped up on show
In Chicago’s museum; now folks pay to see ’em.
Can you guess who has stumped up the dough?

McDonald’s and Disney, that’s who:
They each get a copy or two
Of my bony remains, so their marketing brains
Can develop new lines. A preview:

“T.Rex” burgers, “Sue” cartoons and such;
And, of course, these will soon spawn a clutch
Of toys, games and tacky things, comic strips and wacky things
That adults won’t like very much.

My skull weighs a tonne, to this day.
They examined it every which way
And found my olfactory bulbs satisfactory –
Surprisingly large, so they say.

They dug up my furculum, too:
That’s a wishbone to good folk like you.
Perhaps they think I could fly? I did once have a try –
But wishing was all I could do . . .

Well, I was rather ancient and cronky,
With limb bones all callused and wonky;
And holes in my jawbone (a diseased, and quite sore, bone)
Made my dinosaur roar rather honky.

It’s unsettling, this posthumous fame.
If I had my time over again
I would opt for obscurity and bony security –
Resurrection’s a terrible strain!

This entry was posted in GeoVerse and tagged Dinosaurs, Fossils, Geology, Tyrannosaurus Rex. Bookmark the permalink.