The last group of this now-flightless bird lives in the remote highland forests of the Japanese island of Okinawa, fossil records of its successive extinction in islands of the Ryukyu chain to the south having been found in cave sediments. It seems that, once established on one of these originally wooded islands, the bird found it could manage quite well without all the effort of flying. Then Neolithic Man came along, cleared the trees and found the Yanbaru-kuina rather tasty, as the Okinawans still do today. Meanwhile an animatronic Darwin sits in a Japanese museum . . . 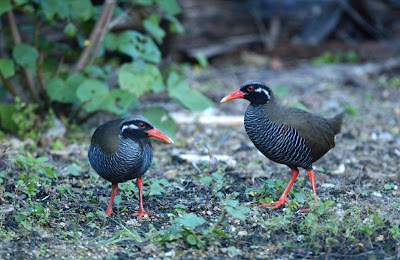 This is the tale of a Japanese rail:
Yanbaru-kuina by name.
Although it has wings, it can’t use the darn things –
The museum’s new robot’s to blame.

With smart electronics and animatronics,
Charles Darwin expounds from his chair:
“The fittest will thrive, the rest won’t survive –
It’s ‘use it or lose it’ – beware!”

Though his message was clear, the rails didn’t hear.
When they found a new island, they landed
And simply stopped flying – they just gave up trying
And very soon found they were stranded.

They became easy prey as Man cleared away
The trees on each island in turn
Up the Ryukyu chain. Okinawa’s remain,
All alone. When will Man ever learn?

This entry was posted in GeoVerse and tagged Evolution, Nature, Yanbaru-kuina. Bookmark the permalink.