In the twentieth chapter of the book of Exodus, Moses is reported as declaring ten God-given rules for the Israelites, some of which have permeated into many subsequent moral and legal systems. Perhaps if Moses had been trained in today’s law schools, he would have been pressed to define more clearly the scope of some of them, like the sixth: 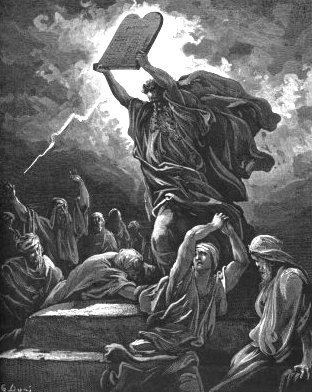 I’m a selfish sort of fellow, it’s myself I think of first:
If confronted with a dragon, I’d make sure he came off worst.
Yes, I know he’d need my flesh so he could fill his empty belly,
But I’m not prepared to die just yet – not on your bloomin’ nelly!

I would grab the nearest rifle, quickly load it with a bullet,
And with finger on the trigger, if he leapt at me, I’d pull it.
Yet it’s said, “You must not kill, because it’s wrong; you mustn’t do it.
No exceptions, no excuses – it’s not right, howe’er you view it”.

Do such people, when infected with a rogue bacterium,
Simply sit around and suffer, looking miserable and glum
As the blighters breed inside ’em? Sounds a trifle idiotic;
Don’t they feel the urge to kill ’em with a good antibiotic?

When the greenfly, slugs, botrytis, caterpillars, pigeons, moles
Leave your garden devastated, your potatoes full of holes,
Is it right that you should starve while such scallywags as these
Run amok among your brassicas and legumes as they please?

There are tiny flying insects, ants and spiders everywhere
Which I massacre unwittingly – I just don’t know they’re there.
I am sure I must have trodden on them, swallowed ’em or sat on ’em.
Whichever way it happens, it’s the same result: I flatten ’em.

If I pick some luscious fruit, or if I harvest ripened grain,
Have I stolen from these seeds their chance to grow and seed again?
If I cut a fresh green cabbage, have I killed it prematurely?
The alternative’s starvation, and that’s not an option, surely?

If I kill a fatted calf (which I hear’s been done before)
To provide a balanced diet, have I really sinned once more?
There’s no doubt that killing must be wrong in many, many cases,
But Thou Shalt Not Kill’s too simple a commandment as life’s basis.

We’ve survived because we’ve eaten things like beef and wheat and lettuce,
And we’ve beat the competition that was always out to get us.
We’re a selfish sort of beast, like all the others on this planet;
Seems like killing things is part of life. Can’t all be wrong, then, can it?

This entry was posted in GeoVerse and tagged Commandments, Killing, Personal, Religion. Bookmark the permalink.