William Pirie was once a headmaster of Horsham’s oldest school, now a
sixth-form college but founded in 1541 by Richard Collyer. Because of this, and
the fact that he used to ride around the town in his donkey cart, he became a
Familiar Figure. This was the excuse for erecting a bronze statue, by Lorne
McKean, of him and his transport near the Waitrose supermarket in Pirie’s Place,
one of Horsham’s tucked-away shopping centres. Children enjoy climbing into the cart to sit alongside the bronze Mr Pirie, or astride his donkey. [Update: Pirie’s Place was ‘redeveloped’ in 2018, when Waitrose moved to a posh new location; but in April 2019 Mr Pirie reappeared, but now waits outside a Premier Inn . . .] 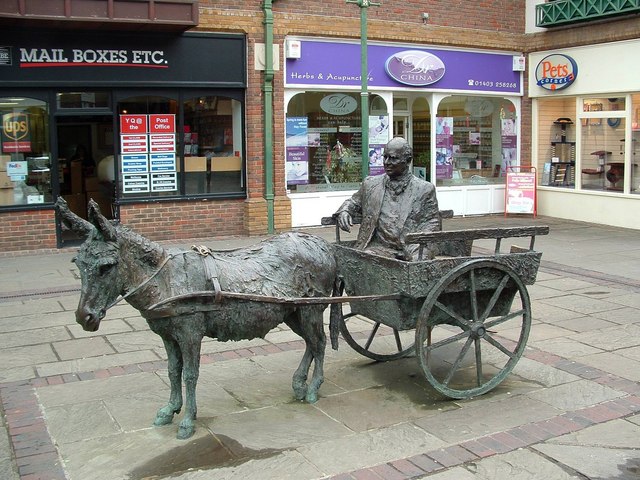 William Pirie’s in his Place, with a smile upon his face
As he sits behind his donkey in his cart
Watching customers in Waitrose at the checkouts, all in straight rows
Like greyhounds in their traps before the start.

Back in the 1840s, Mr Pirie would have taught his
Collyer’s students like the best of college dons.
Now, headmastering long finished, reputation undiminished,
Horsham’s shoppers have his statue, cast in bronze.

Now, too, the children come; you can see them having fun
By pretending they are driving Pirie’s steed.
But William’s very kind, he really doesn’t mind:
His peaceful metal visage pays no heed.

This entry was posted in Uncategorized and tagged Horsham, Pirie (William), Sculptures, Waitrose. Bookmark the permalink.