Dr A C Bishop gave a talk on “Crystal Palaces”, in which he likened the modular structure of London’s old Crystal Palace to the way crystals are built. What he couldn’t have known was that two failed scientists, whose names are now forever associated with changing the guard at Buckingham Palace, had made the same observation when they saw the Crystal Palace burn down in 1936. Here’s why they never became famous: 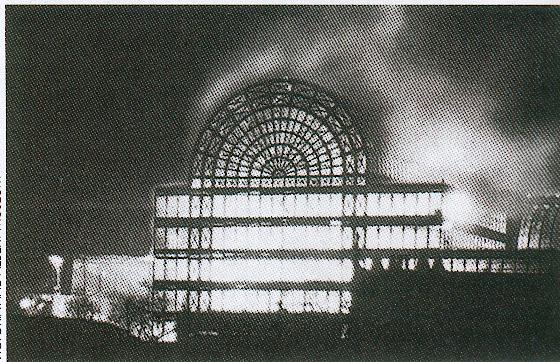 Christopher Robin went down with Alice
To check out the fire at the Crystal Palace.
“I can’t see much crystal; there’s lots of glass,
But glass is amorphous! The whole thing’s a farce,”
Said Alice.

But Christopher Robin, whose practical mind
Had spotted a pattern, piped up, “It’s designed
As a sequence of stacked-up repetitive cells
All made of cast iron, at which Britain excels.
See, Alice?”

“What’s more,” said Chris Robin, “that gives me a clue:
Could crystalline structures be modular, too?”
“Well, layers of atoms, all ordered in rows,
Make one of five patterns, as everyone knows,”
Said Alice. “So pile up the layers, each one on another,
Then you’ve got a crystal!” “Sounds good,” said her brother,
“But theories need proof, so a test must be made.”
“I’ll find a nice crystal and get it X-rayed,”
Said Alice,

“Then Alice’s Law can be used. Let me see:
Sinθ is lambda times n by 2d,
Where θ‘s the angle with brightest diffraction,
And d is the interatomic distraction,”
Said Alice.

“Er, Alice, there’s something we should have foreseen:
That’s Bragg’s Law, discovered in 1913,
Some twenty-three years past. Our theory’s old hat!”
“You’re right, brother Chris. We’re too late, and that’s that,”
Said Alice.