A talk by Paul Sowan, from a group dedicated to the study of underground places, revealed that he couldn’t look at a grand stone building without imagining a matching hole in the ground. Much of the best stone for such buildings in south-east England came from underground quarries in Surrey.

The ground’s not too solid in Surrey;
Its bedrock is far from complete.
Just getting about is a worry
Lest the ground should collapse at your feet.

It’s royalty’s fault: all the rocks
From huge underground quarries, they say,
Have been cut out in whopping great blocks
For their castles, and carted away. 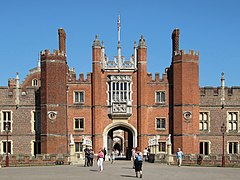 In Hampton Court, Windsor, the Tower,
You can find Reigate Stone all around;
But the rocks that such places devour
Leave some cavernous holes underground.

Though the quarrymen now are no more,
Their workings are littered with rubble.
To some they’re good fun to explore,
But these underground tunnels spell trouble.

But, hey, this is Britain, and so
There’s a group who just couldn’t be manic-er
Over deneholes and diggings below,
And they’re called ‘Subterranea Britannica’.