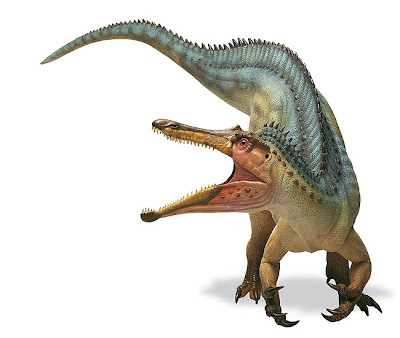 This 124 million year-old fish-eating dinosaur, found in 1983 by Bill Walker, was named Baryonyx walkeri in recognition of its large, curved claw. Watching slides presented by Adrian Doyle, of the Natural History Museum, I noticed that the striations visible on its bones appeared to encode a message:

“Whoever said a rose by other names would smell as sweet
Had not been nominated for the strangeness of his feet.
I know you palaeontologists are bound by taxonomics,
But ‘heavy claw’ is hurtful and unfair. Yours, Baryonyx.”

This entry was posted in GeoVerse and tagged Baryonyx walkeri, Dinosaurs, Fossils, Geology. Bookmark the permalink.