In previous years, the Christmas decorations in Horsham’s Carfax have included angels, set atop tall green posts. But in 2004, they were conspicuously absent. An angelic protest group made contact to explain why: 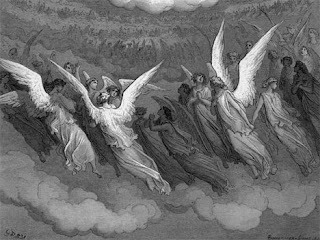 On behalf of the heavenly host,
We felt we should lodge a complaint.
Your town is much nicer than most,
Except – angel-friendly it ain’t.

Last year, we heard grizzly, bizarre facts
From our angelic brothers, who said:
“They impaled us on poles in the Carfax!
Next year, we’ll try Crawley instead.”

So in Horsham, you won’t hear us singing,
For this Christmas we’re not flying down –
We’re going on strike. No more winging
Our mystical way o’er this town.

We hope Horsham folk understand
These are principles we must adhere to.
But hey, (though proclaiming is banned),
Merry Christmas, and happy New Year, too!

This entry was posted in Uncategorized and tagged Angels, Christmas, Christmas decorations, Horsham. Bookmark the permalink.