I once saw Einstein on a train

Events on a very fast train are the usual analogy when trying to explain some aspects of Einstein’s theory of relativity.

I once saw Einstein on a train
Which whistled past our station.
“Your clock ticks much too slow,” I yelled.
“Ach, nein. That’s time dilation,

“I’m travelling near the speed of light.
When I glance back at you,
It looks like your clock’s running slow:
It’s crazy, but it’s true!”

Herr Einstein wasn’t looking well,
He really looked quite thin.
He must have heard: “Nein, nein,” he cried,
And flashed the Einstein grin:

“A metre rule along my train
Is shortened by its speed, too;
That’s why I think I haven’t changed.
A ruler can’t mislead you!

“But even so, I must admit
I find it hard to move.
I have a theory why that is,
Which, one day, I will prove:

“When moving near the speed of light,
You need more energy
To shift a mass from here to there
Than when at rest, you see. 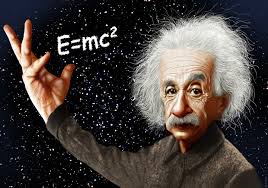 “All matter in the universe,”
The physicist declared,
“Holds energy whose magnitude
Is shown by mc2.

“When I return, I’ll stop the train
And you will learn the truth:
I’ve found the key to time and space,
And to eternal youth!” [This poem won the adult section of the ‘Universe’ competition, organised for National Science Week 2005 by the British Association for the Advancement of Science.]