The roofs of older houses in and around Horsham are tiled with slabs of Horsham Stone, a well-cemented sandstone that occurs within the Weald Clay. On the geological map of southern Britain, the Weald Clay and other Wealden strata appear as nested ‘horseshoe’ shapes whose axis of symmetry lies on a line through Hastings, Horsham and Haslemere. This pattern arises because, though initially horizontal, the strata were squeezed by tectonic forces into a ‘dome’ whose upper layers have now eroded away. On a smaller-scale map, the Horsham Stone shows up as another ‘horseshoe’ around Horsham; or, to the mathematically inclined, it’s like a parabola with Horsham more or less at its focus. So perhaps Horsham Stone has roofed the Horsham area for longer than we’ve realised . . . 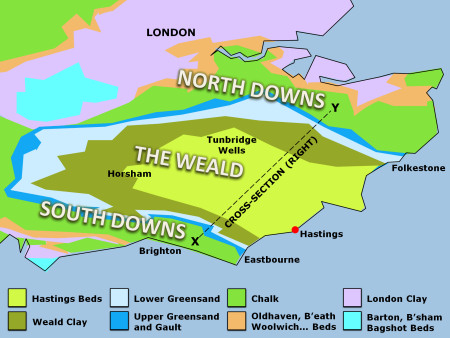 In Wealden strata, you can trace
A horseshoe shape, implying
They made a ‘dome’ above the place
Where Horsham town’s now lying.

But now, the dome is worn away;
So Horsham’s modern locus
Is where the Chalk, greensands and clays
Have parabolic focus.

But, hidden in the Wealden clay,
Is stone they’ve used for roofing.
It’s heavy, but the locals say
It’s good for weatherproofing.

Its ‘horseshoe’ outcrop looks like proof
That, ere the dome wore down,
Old Horsham Stone once formed a roof
Right over Horsham town!

This entry was posted in Uncategorized and tagged Geology, Horsham, Horsham Stone, Stone. Bookmark the permalink.