In 1811, on the shore near her home town of Lyme Regis, Mary Anning and her brother found the skull of what was subsequently recognised and named as an ichthyosaur. In 2005, the vertebrae of another ichthyosaur were spotted on Charmouth beach by Dr. Paul Davis. Its ‘half-skeleton’ was cleaned up at the Natural History Museum before being returned to Dorset in May this year (2007) for a year-long tour of local venues, starting at the Marine Theatre in Lyme Regis. 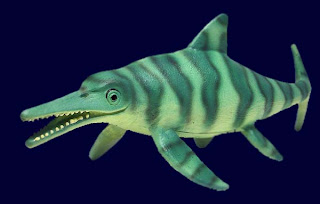 Did you see me in the theatre, in my solo stand-up gig?
I’m too modest, or I’d tell you that I went down really big.
If you missed me, not to worry: when next time you’re down this way
Just ask anyone – they’ll tell you I’m on tour from next May.

An ichthyosaur on tour? The reason is because
My vertebrae had surfaced on the beach. Here’s how it was.
The eagle-eyed Paul Davis, as he scoured the rocks near Lyme
In Mary Anning’s footsteps, recognised me just in time.

He’d spotted, on the foreshore, a row of bumps, aligned.
“An ichthyosaur, I reckon; what a very lucky find!” *
I soon was excavated, translocated and, with care,
Delivered to the NHM. And there they laid me bare –

Chipped away my stony casing till my bones were clearly seen,
And my ichthyosaurial remnants were all scrubbed up squeaky clean.
And so I’ve gone on tour; but it won’t go to my head
For I’m only half a skeleton, and very, very, dead!

NOTE * It is possible that other, less poetic, language was used here.

[Image (of a complete ichthyosaur): darkdorset.blogspot.com]

This entry was posted in GeoVerse and tagged Anning (Mary), Fossils, Geology, Ichthyosaurs. Bookmark the permalink.