A simple idea for an oil-rich country like Libya: build pipelines to move water from under the desert, where it’s not needed, to the populated coastal areas, where it is. Commentators argue that better things for the country that could have been done with the money, but it helped bring its military leader, Colonel Muammar Al Qadhafi, a degree of international acceptance. 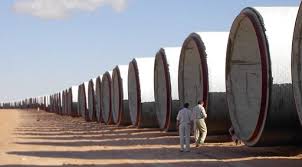 The Great Man-made River is grand.
It’s a river but not as we know it:
It crosses Sahara’s vast sand,
Piped a few metres below it.

It sucks out the water that’s lain
Within aquifers formed long ago.
From desert wells, huge concrete drains
Route it north to the plain down below

In a ‘River’ three thousand miles long
For the cities on Libya’s coast,
Where its six million citizens throng –
Where Qadhafi says they need it most.

The aquifers, though, won’t refill.
Once it’s gone, it is gone, as they say.
So the outlook’s not quite such a thrill –
The River will stop, one fine day.

If they use it for crop irrigation
As well as for washing and drinking,
It will not be too long to cessation:
Within fifty years, some are thinking.

And hydrologists say, in a while
This rapid depletion could cause
Much seepage away from the Nile,
And Egyptian/Libyan wars.

But there’s something that’s certainly true:
For Qadhafi, it’s useful PR.
“Look, world, what we Libyans can do!”
Says the voice of the GMMR.

This entry was posted in Uncategorized and tagged Geology, Hydrology, Libya. Bookmark the permalink.