The flint miners of Cissbury

Cissbury Ring, a hill-top near Findon, Sussex, is indented with infilled Neolithic flint mines. It was one of the major commercial and industrial nerve centres of the Neolithic world, and supplies of Cissbury flints have turned up in northern England and all over Europe. A teacher at school once mentioned that flint arrowheads can still sometimes be picked up on the South Downs. Ever since, I’ve kept my eyes peeled, but to no avail. 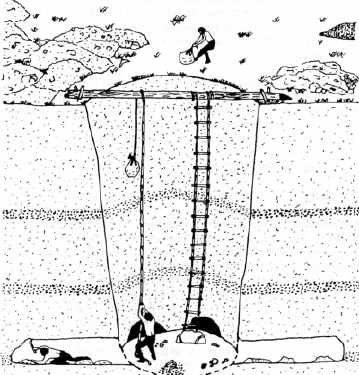 The flint miners of Cissbury were tough and hardy bands.
Five thousand years ago with red deer antler picks and hands
They dug straight down into the Chalk, some forty feet or more,
Then hacked out spoke-like tunnels on the bell-pit’s flinty floor.

The flint was what they’d come to get: black, hard, and good for knapping.
Once out, each nodule would be flaked on site, by deft and skilful tapping.
A flake of flint is hard and sharp, but a practised stone-age hand
Could fashion tools and arrowheads for trade across the land.

It’s said that flinty arrowheads can still be found today,
In northern parts of England, and in Europe – far away
From Sussex, where those miners left, as far as I can see,
Just dents on Cissbury’s summit – and no arrowheads for me!

This entry was posted in GeoVerse and tagged Cissbury Ring, Flint, Personal. Bookmark the permalink.