A depressed zeolite, named after the Yale chemistry professor Horace Lemuel Wells (1855–1924), explains how it lost its individuality when in 1997 the International Mineralogical Association decreed it was just a variety of Phillipsite or Harmotome. There’s now a letter D against its entry in the organisation’s List of Mineral Names (http://pubsites.uws.edu.au/ima-cnmnc/IMA2009-01%20UPDATE%20160309.pdf). 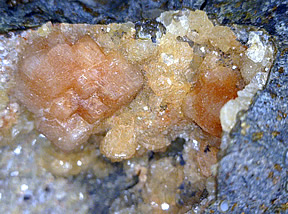 I’m a zeolite mineral, now nameless.
But I once had my moment of glory
And a name: it was ‘Wellsite’ they called me.
But it didn’t last long. Here’s my story.

I was picked up in North Carolina
And soon found international fame:
For a century I was a mineral
With my own individual name.

My description was widely reported:
(Pratt and Foote, Am J Sci, ’97).
After years spent cooped up in a geode,
I thought I’d ascended to heaven!

But my raptures were cruelly ended
When the IMA’s list got re-edited
And the dread letter D was appended,
Meaning ‘Wellsite’ had now been ‘discredited’.

Was it something I’d done? I am innocent
(Lustre vitreous, whiter than white).
It’s a wicked miscarriage of  justice.
Obscurity beckons. Good-night.

This entry was posted in GeoVerse and tagged Geology, Minerals. Bookmark the permalink.