It’s April 2010, and a volcano below Iceland’s Eyjafjallajökull glacier has erupted, throwing abrasive particles kilometres into the air which has shut down all air travel in northern Europe. 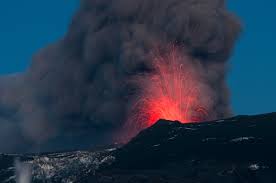 Iceland, famed for ice and fire,
And banks that lose your cash,
Has hit the headlines once again
Erupting plumes of ash.

Atop the Mid-Atlantic Ridge,
A fit-to-burst volcano
Blasts through a glacier with a name
Pronounced as only they know.

So now, no contrails scar the skies,
The air is strangely hushed;
For aircraft are not built to fly
Through fine volcanic dust.

It’s tough for some, but proves a point:
The Earth’s still hot below.
That heat is how we all survive –
It’s making sure we know. . .

This entry was posted in GeoVerse and tagged Geology, Iceland, Nature, Volcanoes. Bookmark the permalink.