Angela Connor’s giant watery sculpture at the meeting of Horsham’s West Street and Bishopric had been resting at the bottom of its pole for most of 2009 while the Council wondered whether to repair it or replace it. In December, they decided on the former option and it rose again on 8 May 2010. 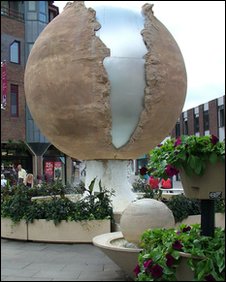 The Shelley Fountain spent long days
Supported by two RSJs,
Locked up inside a metal cage
And suffering the ills of age.

It’s Horsham’s Marmite, loved and hated.
So should the thing be reinstated?
Its busted guts would need some mending,
But would the work be never-ending?

Would repairs be economic?
Would the cost be astronomic?
Horsham folk were sore divided.
The Council dithered, then decided.

Now its plumbing’s back in action,
Horsham’s own unique attraction.
The Shelley Fountain’s operational,
A Rising Universe – sensational!

This entry was posted in GeoVerse and tagged Horsham, Sculptures. Bookmark the permalink.