Our human condition limits our ability to perceive and experience the realities of the universe. At times in our history, we have drawn ‘obvious’ conclusions about them from what little we have been able to sense; for example, everyone can see the sun clearly going round the earth, like the Moon and stars do. But science has looked beyond the obvious.

First impressions can mislead.
So change your point of view
To get a new perspective; then
You’ll see the world anew. 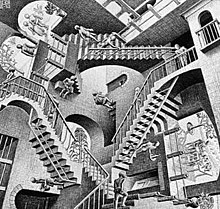 We see the amazing range of life, all creatures, great and small.
That’s why we used to think we were the greatest of them all.
The dinosaurs thought much the same, before we came along;
It only goes to show just how our boasting was all wrong.

We see the skies above our heads: the Universe surrounds us.
It’s only natural, then, to think it all rotates around us.
But, thanks to dedicated men who measured with precision,
We came to learn our place in space demands a wider vision.

We think time passes at the rate our clocks and watches tell:
The Greenwich pips and Big Ben’s strike confirm that all is well.
But that’s because we never move at near the speed of light
When time’s dilated. Then whose watch has got the time just right?

Diseases were a mystery: they’d weaken and they’d kill.
It must be something bad we’d done – or witchcraft – made us ill.
But scientific medicine has put such fears at ease:
And now we know that natural causes underlie disease.

The Earth on which we humans stand seems solid; and the pages
Of maps of continents and seas have served us well for ages.
But plate tectonics is for real: geologists hare proved
That ocean ridges make new crust, and continents have moved . . .

Surely matter is eternal? That at least can be observed.
Don’t basic laws of physics say that matter is conserved?
Try telling that to Einstein, or to people in Japan.
The energy in matter’s made its mark on every man.

First impressions can mislead.
So change your point of view
To get a new perspective; then
You’ll see the world anew.