It’s July, and I’ve spotted a worker ant, struggling across some paving slabs carrying what looked like the wing of a small moth in its mouth. It couldn’t have been easy: the wing was sticking up near-vertically and being blown about by the breeze. She must have had a good reason for all her efforts. 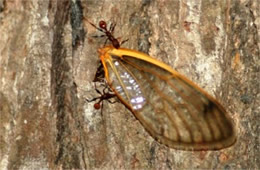 Look! There’s an ant with a wing in its mouth,
Being blown to and fro by a breeze from the south;
But why would an ant be carrying a wing?
Self-adornment, maybe – a sort of ant bling?

Now she’s pulling it into her nest down below.
P’raps she’ll frame it and name it and put it on show,
And her ant friends will scoff at this formic upstart:
“You’ve been at the aphids again. That’s not art!”

I know what she’s up to. At the end of July
The drones and the queen ants will take to the sky
For a frenzy of mating and airborne attraction.
And this ant, a worker, wants some of the action.

So she’s thought of a way to pretend she’s a queen:
She’s secretly building a flying machine!
With six legs to pedal it, there’s plenty of power
To flap her new wing with for hour after hour.

She’ll test it out soon, perhaps add more wings,
And show all the drone ants she knows a few things.
(Here’s one thing she knows that would fill them with dread:
Soon after their flight, all the males end up dead. . .

This entry was posted in GeoVerse and tagged Ants, Nature. Bookmark the permalink.