Isaac Newton (1642–1727), born in Woolsthorpe, Lincolnshire, did well at school in Grantham and went on to Cambridge University in 1661 with a keen interest in philosophy and mathematics. Shortly after getting his degree, the university closed as a precaution against the spread of the Great Plague. Newton spent two productive years at his home in Woolsthorpe before returning to Cambridge in 1667. He wrote reams on a wide range of subjects, invented the reflecting telescope that still bears his name, became a Professor of Mathematics, a Member of Parliament and the Master of the Royal Mint. On a personal level, I owe it to his fertile brain that I was able to find employment in interesting areas of engineering. 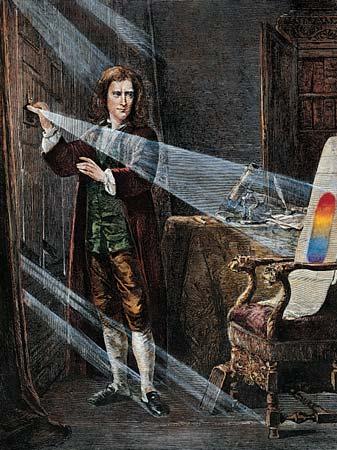 Isaac Newton of Woolsthorpe was bright:
With a prism he split the Sun’s light
Into colours. And then,
With a prism again,
He combined them once more – and made white!

Space, he believed, was a frame
And time for all folk was the same;
The two were distinct,
And not interlinked
As ‘space-time’, as Einstein would claim.

It was Newton’s keen mental resources
That put right our thinking on forces:
His three laws of motion
Were a brilliant new notion
For working out planetary courses.

What was it, he wondered, gave traction
To the apple whose legendary action
Raised questions profound
By its fall to the ground?
It was gravity’s fatal attraction.

And in maths he had clever ideas,
But wouldn’t divulge them for years.
(He thought there’d be ructions
If he published his ‘fluxions’
And feared the contempt of his peers.)

Inventor, Mint Master, MP:
Isaac Newton would tackle all three,
Plus religion and science
(An unholy alliance!),
And that ancient pursuit, alchemy.

It’s to Newton I owe my career
As a research-inclined engineer.
When I used his equations,
On many occasions
I could sense the great man hovering near . . .