This was a solid pink block of pink stuff in a tin which had to be vigorously scrubbed with a rotary action of the toothbrush so that the foam produced would transfer to the bristles. It seemed to last for ever. Children were warned that ‘Dragon Decay’ would attack your ‘Ivory Castles’ if you didn’t use it. (Before my time, the Dragon had been a Giant; but whatever he was, he managed to breach Mr Gibbs’s defences without too much trouble.) 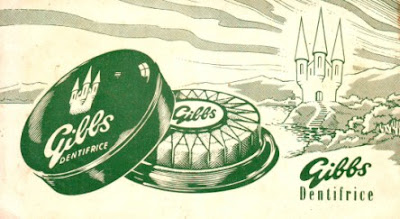 “It’s Gibbs Dentifrice,” my parents would say.
“It’s the best way we know of keeping at bay
The terrible spectre of Dragon Decay.
You must brush your teeth well, at least three times a day.”

I expect you remember. It came in a tin
Containing a block of bright pink stuff within
Which you’d scrub with your toothbrush, and then you’d begin
To shine up your gnashers for a sparkling grin.

More fun, though, was toothpaste, in tubes you could squeeeeeze
And squirt out a mint flavoured sausage with ease;
And red, white and blue stripes appeared by degrees!
But I still feel nostalgic for Gibbs Dentifrice . . .

This entry was posted in GeoVerse and tagged Nostalgia, Personal, Toothpaste. Bookmark the permalink.