A group of assorted British scientists on the RRS James Cook used a remotely operated vehicle to explore parts of the East Scotia Ridge in the Southern Ocean between Antarctica and South America. In January 2010, they discovered a number of new species living around its deep-sea hydrothermal vents. One of these was a new species of ’yeti’ crab, characterised by a dense ventral coating of long setae (hairs or bristles) covered in filamentous bacteria. These crabs were crowded together – up to 600 per square metre – around vent chimneys. One of them explains: 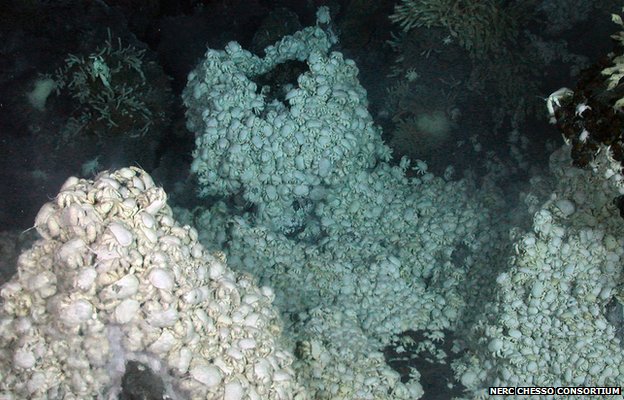 On the East Scotia Ridge, where new sea-floor is born,
There are mineral towers of chimney-like form
Whose cosy environment shelter affords,
And that’s where my mates and I gather in hordes.

Now here is a fact that you’d never have guessed:
Volcanic vents can put hairs on your chest –
The hairs trap bacteria which I like to eat:
I scrape ’em all off and they go down a treat!

I’m a yeti crab really, but lacking a name,
Which the crew of the James Cook ship felt was a shame.
Can you guess what they called me? Go on, have a stab!
That’s right, I’m the hairy-chested Hasselhoff crab!

This entry was posted in GeoVerse and tagged Crabs, Hydrothermal vents. Bookmark the permalink.