Since the early 1980′s, discoveries in the gravel pits at Boxgrove, near Chichester, have provided detailed insights into the life and palaeoecology of the earliest colonisers of Northern Europe, some 500,000 years ago, and not long – in geological terms – before the onset of the severe ‘Anglian’ glaciation of the British Isles. Finds included human teeth with tartar deposits and cutmarks (assumed to be due to the use of stone tools on meat held in the mouth), fine worked flint tools (‘bifaces’) and the shinbone of a hefty Homo heidelbergensis. Intriguingly, both ends of this tibia – dubbed ‘Roger’ after its discoverer – had been gnawed, possibly by a wolf, though whether before or after Roger’s demise could not be determined . . .  Surprisingly, the archaeologists missed a fragment of deer antler, on which Roger had scratched the following: 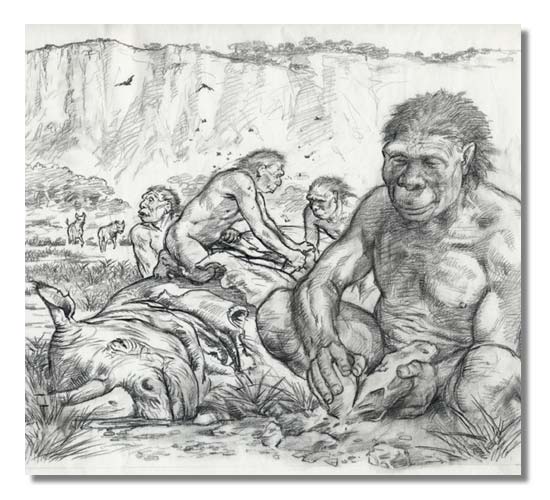 I’m Roger de Boxgrove, a ‘Heidelberg’ Man.
I am tall, with big muscles – a bit like Tarzan.
Your Sussex geology’s serving me well,
With flints for my hand-tools, and good food as well.

I make my own tools for butchering the meat
That the younger blokes catch, so we can all eat.
I call them “bifaces” – it seemed a good name;
And if they get blunt I just knap ’em again.

Our food preparation is basic, I know,
But time’s of the essence – it’s “rhino to go”.
We cut up the meat so our ladies can stew it.
Meat cutting’s an art, so here’s how to do it:

You hold in your teeth a nice juicy joint
And slash bits away with a razor-sharp point.
It might not do much for your dental enamel,
But there’s no better way of carving a mammal

We keep our eyes open for lions and bears,
To make sure they’re our meal and we are not theirs!
(There’s this wolf I keep seeing, with a glint in his eye,
Keeps looking at me – I can’t work out why . . .)

Some talk of climate change coming our way;
It’s getting much colder, that’s all I can say.
My kids might move south soon, but I shall stay here.
Sorry, must go – got to cut up a deer . . .

This entry was posted in GeoVerse and tagged Boxgrove, Fossils, Homo heidelbergensis. Bookmark the permalink.