It’s not just children who wonder about Santa . . . 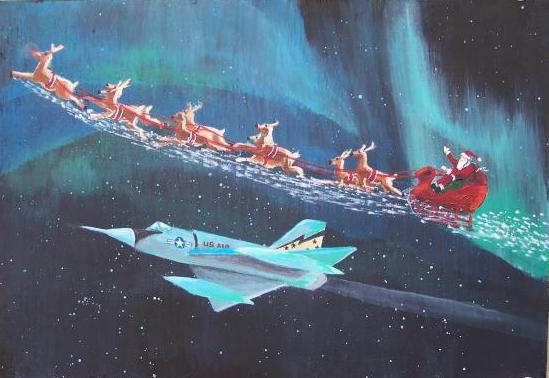 Poor Santa needs help. Consider his plight:
Traversing the skies in the blackness of night
With only a reindeer’s red nose as a light,
And undeclared goods in a sack, out of sight,
He hasn’t got radar, he’s not wearing white –
It seems the poor fellow just can’t get it right.

Air Traffic Control, in a panic, declare,
“Unidentified objects, high up in the air:
One large one, nine small ones (all but one as a pair) . . .”
The RAF scramble, for though they’re aware
False alarms aren’t uncommon, they need to take care
Lest terrorist groups are behind the affair.

The jets in formation roar into the sky.
As they close on their target, they hear a voice cry:
“I say, chaps, go easy, I don’t want to die!
I’m just Father Christmas, a harmless old guy
Just driving my sleigh through this wintry sky,
Delivering toys until morning is nigh”.

“Can you prove it?”, asked the RAF man, with a sneer.
“Am I supposed to believe those are flying reindeer?”
“Ho ho ho,” said FC, “Come, be of good cheer,
And check out the soot on my jolly red gear
From the chimney descents of a long, long career.
Merry Christmas to all, and a happy New Year!”

[Image: noradsanta.wikia.com (The RAF’s pictures of this event are classified, so you’ll have to make do with this USAF one . . .)]

This entry was posted in Uncategorized and tagged Christmas, Santa. Bookmark the permalink.