Launched in March 2004 from Kourou in French Guiana aboard an Ariane-5 rocket, the Rosetta mission took over 10 years to travel more than six billion kilometres and reach Comet 67P/Churyumov–Gerasimenko. The European Space Agency say it cost around 1.3 billion euros. The plan is that, in November, a lander called Philae will anchor itself to the surface and deploy a number of on-board experiments, while the (nameless) orbiter will fly round and round the comet taking measurements as it passes close to the Sun. There was restrained jubilation at the Darmstadt mission Control as Rosetta arrived at the comet on 6 August 2014. But not everyone was so happy . . . 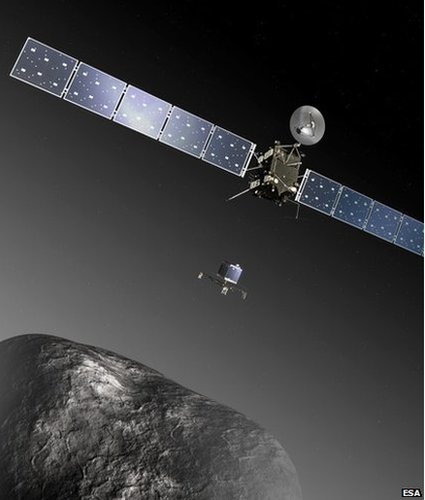 So here I am: I have arrived.
Is this the reason I survived
A ten-year trip through empty space:
To reach this god-forsaken place?
Was this the target that they meant
When they pre-programmed my ascent?
Was there an unplanned deflection?
Or did they choose the wrong direction?

Ten years to get here, and for what?
They fired me off, and then forgot –
They left me all alone to roam
The Solar System, far from home.
Half a billion miles from Earth! It
Makes me wonder, was it worth it?
What so special in this lump
Of rock and ice? It’s just a dump.

It seems I’ve got to orbit round
This frozen hunk that I’ve just found,
They’re demanding that I must
Map the ground, inhale some dust,
Taste and smell the strange aroma
They hope is in the comet’s coma.
And they’ve plans for something grander
When I’ve dumped my Philae lander. It’s been riding on my shoulder;
Soon, it’s got to drill that boulder1.
(Glad to see the back of it
And all its clever techie kit:
Ratios of isotopes2,
Magnetics3, structure4 – even hopes
Of finding signs of life5, and more –
It’s been a thankless, tiresome chore.)

It never was a lot of fun
But phew!, I’m getting near the Sun,
So it will not be too surprising
If I – and it – start vaporising.
And when they’ve finished using me,
What then? As far as I can see
They’ll turn me off, abandoned, lost,
And try to justify the cost.

Experiments on the lander include:
1 SD2
2 PTOLEMY
3 ROMAP
4 CONSERT & MUPUS
5 COSAC (“detects and identifies complex organic molecules from their elemental and molecular composition”)

This entry was posted in GeoVerse and tagged Astronomy, Comet, Rosetta, Space. Bookmark the permalink.