Fossil remains found in 1985 in a brickpit at Rudgwick in Sussex were initially described as those of an iguanodon. Then, after a reassessment by Dr William Blows, they were later attributed to a new dinosaur polacanthid species, Polacanthus rudgwickensis. But, as hinted at in the Postscript to “Old Spiky“, they have now (September 2015) been re-classified by Dr Blows as Horshamosaurus rudgwickensis, recognising the Sussex town in whose museum they now reside. Someone is not happy . . . 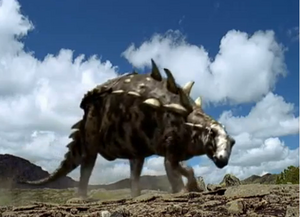 They dug me up at Rudgwick some thirty years ago.
Well, exhumation’s one thing, but now this savage blow:
They’ve blooming well re-named me, though I’ve had two names before.
An existential crisis for a Rudgwick dinosaur –
I’m as confused as they are! “An iguanodon” they’d said,
Till Bill Blows put his oar in and turned it on its head:
“Polacanthus rudgwickensis, I would say . . . or maybe not . . .”
Well, now he’s made his mind up. I think he’s lost the plot:
Horshamosaurus? Crikey! Perhaps it’s just a phase
He’s going through. At least my rudgwickensis stays . . .

This entry was posted in GeoVerse and tagged Dinosaurs, Fossils, Horshamosaurus, Polacanthus. Bookmark the permalink.