According to a paper in the Journal of Geophysical Research: Space Physics, the absorption of UV light emitted by Venus peaks in two regions of the spectrum, either side of 320 nm. The presence of sulphur dioxide in the Venusian atmosphere explains the shorter-wavelength peak; but the other ‘usual suspects’ for UV absorption, iron compounds  and nitrogen dioxide, don’t have properties that would make them candidates for the other, longer-wavelength, absorption peak. Chlorine gas would fit the bill if it were present at around one part per million, but it’s not known whether this amount could be generated by the action of sunlight on molecules of hydrogen chloride. So the cause of the second absorber in the atmosphere of Venus remains a mystery. Could it be some form of life? 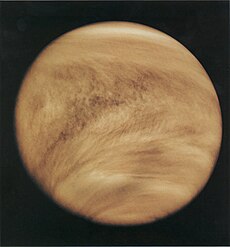 There’s something in the atmosphere of Venus which is queer,
It soaks up ultraviolet waves: they simply disappear,
Absorbed by who-knows-what in the planet’s upper sky.
Could it be chlorine molecules? Unlikely, and here’s why:

You’d need one part per million, and as far as I can tell
That means a lot of sunlight on a lot of HCl.
I have another theory. In those early Eagle comics,
Dan Dare would often get involved with alien genomics.

The Mekon and the Treens who lived on Venus way back then,
Outsmarted by Dan Dare, kept on coming back again.
I reckon things have got so hot now, on the planet’s surface crust*,
That all these green and evil guys evolved, as all things must.

I bet they have discovered ways to break up HCl
To manufacture hydrogen, and chlorine gas as well.
Sustained by breathing H2 gas, each on a Mekon chair,
They’ve moved their evil empire up into the Venusian air.

But they’ve no use for chlorine, so it just hangs around,
And UV light of certain wavelengths never leave the ground;
And that’s what makes the absorption peak in Venus’s emissions!
(We need Dan Dare to go there now and confirm my suspicions . . .)