Did the truelove of the writer of the eighteenth-century carol forget what he’d sent her the day before? The unfortunate recipient (whom I thought most likely female) received a total of 376 items over the pre-Christmas period. But, necessity being the mother of invention, she had hatched a cunning plan . . .

On the first day of Christmas, my truelove sent to me
A partridge in a pear tree.

So I emailed my truelove: “What am I s’posed to do
With a partridge and a pear tree? My love, I thought you knew
I haven’t got a garden to plant the pear tree in;
And that partridge in the hallway is making such a din!”

On the second day of Christmas, my truelove sent to me
Two turtle doves
And a partridge in a pear tree.

He hadn’t read my email! They’re clogging up the hall,
Those partridges and pear trees which I didn’t want at all!
I’ll ring him up . . . he’s out. That leaves me pretty vexed:
I hope he’s not gone shopping – who knows what he’ll buy next?

On the third day of Christmas, my truelove sent to me
Three French hens,
Two turtle doves
And a partridge in a pear tree.

Now this is getting silly. Where shall I put them all?
The French hens weren’t too happy when I shoved them in the hall
With three partridges in pear trees, and four doves – I think that’s it . . .
(I had to prune the trees a bit, to make sure they would fit.)

By the seventh day of Christmas, can you guess what I had got?
Despite all my pleas,
Twelve turtle doves,
Fifteen French hens,
Sixteen calling* birds,
Fifteen go-old rings;
Twelve geese a’cackling,
Seven swans a’swimming,
And some partridges in some pear trees.

On the two next days of Christmas, my truelove sent to me
The usual, and some girls:

Sixteen maids a’milking, in a rustic sort of way,
And nine ladies dancing – what is he trying to say?
By now, my house was full, jam-packed to overflowing;
What would he send me next? There was no way of knowing . . .

On next two days of Christmas, my truelove sent to me
The usual, and some blokes: 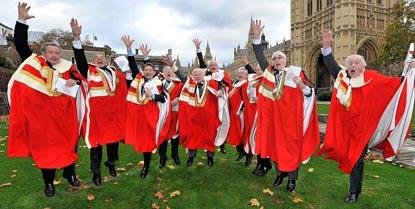 Twenty lords a’leaping, eleven pipers piping –
The neighbours heard the racket, from behind their curtains peeping,
But soon came out to join the fun, and now the street was humming!
And then – my truelove’s master stroke – came twelve drummers drumming!

I saw a chance to make some cash (my truelove wouldn’t know):
I’d charge them all to watch it – my Festive Christmas Show!

And then I’d sell the pear trees, set free a turtle dove
And a calling bird or two to fly to my truelove.
I’d flog, for Christmas dinners, those geese and fat French hens –
But I’d give the swans back to the Queen, so we could still be friends.
And, finally, I’d auction off each lovely golden ring.
Then I will thank my truelove. What will next Christmas bring!

This entry was posted in GeoVerse and tagged Christmas, Songs. Bookmark the permalink.