Volcanic eruptions are notoriously unpredictable. But analysis of thin sections of crystals in lava from Mexico’s Popocatépetl has enabled researchers to probe the subterranean travels of magma as it flows from one chamber to another on its convoluted journey to the vent. It’s too late, though, to be of any help to the early inhabitants of nearby Tetimpa, who migrated to a new settlement further north, leaving remains that were found by archaeologists nearly two millennia later. 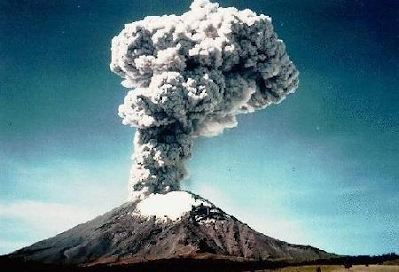 Though Popocatépetl looks like a boiling kettle,
With steam escaping from its open spout,
You must be on your mettle, or Popocatépetl
Will do its level best to catch you out.

(Tetimpa’s folk knew well that it wasn’t wise to dwell
When old Popo was about to blow his top:
For they had learned to tell when to stay or run like hell
And sacrifice to Popo their corn crop*.)

And each crystal’s grey-scale banding provides some understanding
Of mineral diffusion rates, which show
How long the magma took (you can read it like a book!)
To travel through the labyrinth below.

Of course, diffusion stops when old Popo’s crater pops
And magma hits the cooler outside air–
That’s how you can assess how long (well, more or less)
The magma had remained entombed in there.

Some six and forty years is the answer, it appears*,
Which suggests eruptions here, my source reports,
Will not be quite as bad as what killed Young Pliny’s dad –
A ‘Plinian’ eruption – fame of sorts!

This entry was posted in GeoVerse and tagged Crystal structure, Popocatépetl, Volcanoes. Bookmark the permalink.