All terrestrial dinosaur lineages became extinct some 65 or 66 million years ago. Some blame the volcanic eruptions that formed the Deccan traps, others cite the Chicxulub asteroid impact. But could it be that, if the effects of the former had put them under ecological stress, the effects of the latter could then have finished them off – the “pressure-pulse” hypothesis? This unfinished report, filed by a Late Cretaceous correspondent, has just been discovered: 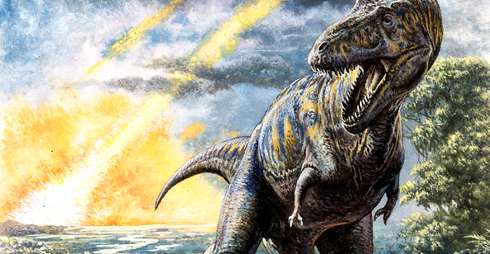 I’m a dinosaur philosopher with a hard-earned PhD
In Palaeogeobioevolution.
I’ve studied dino species in their great diversity
And found a problem needing resolution.

We’ve colonised all niches in air and land and sea,
And modified our body plans to fit.
But no niche could protect us if some great catastrophe
Should happen to this Earth: we’d all be hit!*

This is the Late Cretaceous, and for some time now, the sky
Has had a reddish tinge. The air is hot
And smells of something strange. I cannot help but wonder why –
There’s something going on, I dunno what.

It’s putting heavy pressure on our staid old dino ways.
“Look out for ‘pressure-pulse’”, it’s often said.
Hey, what’s that bright fast-flying thing that looks like it’s ablaze?
Is that the ‘pulse’? If so . . . we’ll soon be . . .

*Except for the lineage leading to birds – but our correspondent couldn’t have known that.